Good God, Adelina’s arancini! He’d tasted them only once – but the memory had surely entered his DNA.

Inspector Montalbano is one of the most beloved characters of contemporary Italian literature, as well as of tv series, so much so that Camilleri’s novels have been translated into many languages.

But a translation, unfortunately, can’t render the idea of sicilianità given by Camilleri’s peculiar way of writing, a mix of Sicilian dialect and Italian Language, rich of dialogues and Sicilian expressions which sometimes are difficult to understand even by an Italian.

When you read Camilleri’s novels, you almost “hear his voice”, his cadence, his way of speaking. He had an extraordinary sensitivity in choosing the right words at the right time.

The story from which this recipe is taken is entitled “Montalbano’s rice fritters” (Gli arancini di Montalbano) and it is part of a collection of short stories, “Montalbano’s first case and other stories”, translated by Stephen Sartarelli and published by Penguin.

Montalbano’s stories are rich in references to food. The Inspector appreciates good food, especially when prepared by his maid, Adelina. Here she invites Montalbano to her house for New Year’s eve.

Adelina had two delinquent sons who were always in and out of jail. It was a lucky conjunction, as rare as Halley’s comet, that they were both out at the same time. One to be solemnly celebrated, therefore, with arancini. […] There was no doubt in Montalbano’s mind as to whom he should dine with on New Year’s eve. Only one question still nugged him before he fell asleep: would both of Adelina’s delinquent sons manage to stay out of jail until the following day? 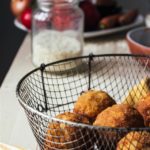